Migration and borders: the stakes of of the non-existing migratory policies 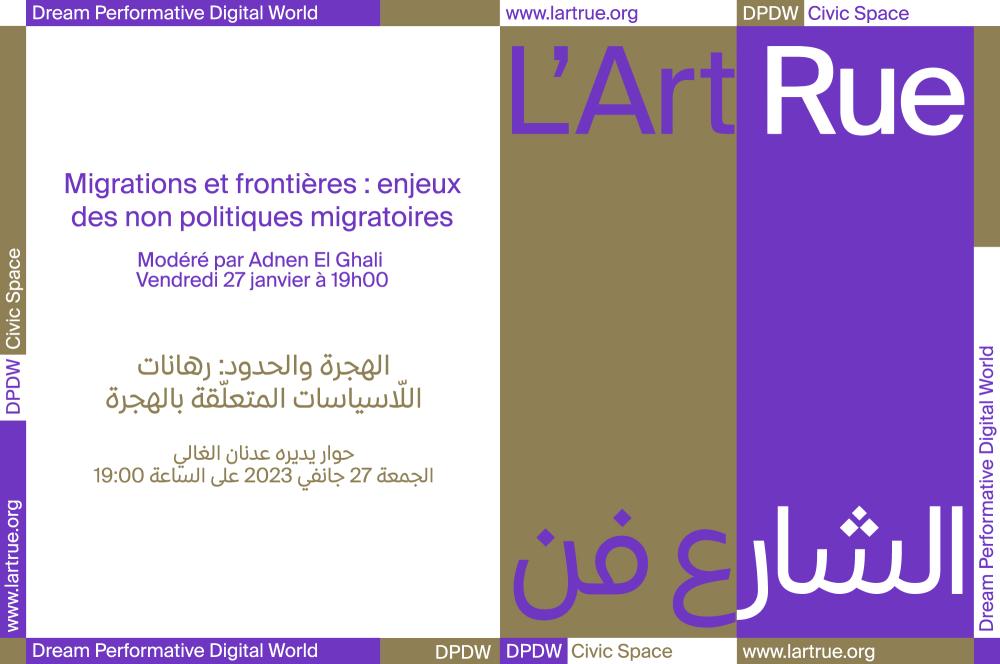 In 2023, L'Art Rue will resume its online Facebook debates in the framework of the DPDW Civic Space.

To start this new cycle we will deal with the vast issue of migration and borders with moderator Adnen El Ghali and panelists Valentina Zagaria, Steffen Jensen and Thomas Bellinck.

In view of the lack of a national migration strategy and of consistency in terms of status, migrants seem to be increasingly caught up in a legal system which is not adapted to the situation and which has been overturned by international conventions ratified without harmonization.

Caught in a vise between the indigent countries they are fleeing, a European Eldorado who is outsourcing its borders to North Africa to drive them away and transit countries without vision and financially dependent on the big money men, migrants are affected in their rights and pushed towards community solutions to ensure their protection.

It is to these questions that the guests of the Civic Space of L'Art Rue will try to bring elements of answers and perspectives in the framework of a first exchange moderated by Adnen el Ghali and which will give the floor to Valentina Zagaria, anthropologist and Associate Researcher at the IRMC, Steffen Jensen, Professor of Global Refugee Studies and Senior scholar at DIGNITY, and Thomas Bellinck Belgian-based artist known for his work focused on state-sanctioned violence, memory politics and mobility injustice.

Anthropologist based in Tunis, working on issues of borders, migration and political change. Valentina is also the founder of the theater company Senza, with which she writes and directs ethnographic theater.

Thomas Bellinck is a Brussels-based artist whose documentary practice branches out into theatre, installation art, TV, ... He is known in particular for his work focusing on state-sanctioned violence, memory politics and mobility injustice.

Steffen Jensen is professor of Global Refugee Studies and a principal research fellow at DIGNITY: Danish Institute Against Torture. He has published numerous articles on human rights, police violence, gangs and displacement.

>> For more information on the issues of migrations

> The protection of sub-Saharan migrants in Tunisia: community responses and institutiional questioning  by Adnen El Ghali (On line article to read on the website of The British Academy).